I was already aware that the next part of my journey was going to be the most difficult one. I’d already met a few people who were travelling south who’d said how tiring it was. I enquired about transport routes that would enable me to miss out the section. By taxi from Inversnaid it would take ages, as I’d have to go via Aberfoyle which is miles away. It turned out that a much quicker route would be to take the ferry from Inversnaid over to the other side of the loch, and then take a bus to Inverarnan.

In the end I did neither of these things. I’d shared a room with a Spanish girl called Maria and it turned out that she too was walking to Crianlarich that day, so we decided to walk together. I was really glad I wasn’t on my own, because the path really was that tiring and it was good to have some support. It had steep ascents and descents and involved clambering over rocks, and I was so glad it wasn’t raining. I think the path would have been quite dangerous in bad weather. Amazingly, the path was greatly improved in the mid-1990s and I’m told it used to be far worse! It was a swelteringly hot day though, certainly too hot for walking. There was no rain and no breeze, so the dreaded midges were out in full force. I was already covered in midge bites from the day before, and the situation became progressively worse. I’ve been wearing my Montane trousers which are excellent. One of the excellent features is that in hot weather, you can undo a zip at each side and it goes through to a kind of mesh fabric, thereby letting air through. Unfortunately, it also lets midges through. There were midges and other insects literally swarming around the loch. I’ve been using a lot of antihistamine cream this week!

Finally, after a couple of hours of exhausting walking, the difficult path came to an end at a beautiful little bay containing a tiny island. We had a well deserved rest.

Further on up the path we passed the bothy at Doune.

Neither of us had ever been inside a bothy before, so we had to go in and have a look. It looked absolutely fantastic, and if I’d had a sleeping bag and enough food I would’ve loved to have stopped here for the night. It’s right next to the loch, so it has amazing views.

We eventually stopped a bit further on for a lunch break, where I took my favourite photo of the day.

After what seemed like hours along a high path, we eventually descended to Beinglas Farm. We’d been expecting to have to take a small detour to Inverarnan to refill our water bottles, so we were very happy indeed to find that not only does the West Highland Way go more or less straight through the Beinglas campsite, but also that the site has water taps, toilets and a shop selling chocolate. Excellent stuff. We collapsed under a tree, and I drank an entire litre of water in about twenty minutes. We also spoke to at least three different groups of people, all of whom were stopping at Beinglas or Inverarnan for the night and had therefore reached their destination. We found ourselves feeling envious of them because we still had seven miles to go. The path had been so tiring and the weather so hot that we had to lie down for at least half an hour before we could wrench ourselves up and start walking again. Amazingly, I’ve met a few people this week who are doing the entire twenty mile stretch from Rowardennan to Crianlarich all in one go. Personally I wouldn’t recommend it! It really is a good idea to stop at either Inversnaid or Inverarnan/Beinglas along the way, maybe even both if you have the time.

Luckily the second half of the day was nowhere near as exhausting as the first half, but it felt tiring anyway. Somewhere near the end, the path goes under the railway by means of something called a sheep creep. 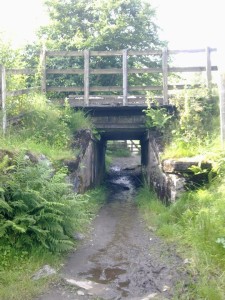 It wasn’t too bad a maneuver for me, but tall people would have to stoop quite a lot to get through in one piece. I estimate the ceiling height to be just under 5ft.

Still tired, we were very happy indeed to reach Crianlarich after what felt like a very long day. We said our goodbyes, Maria went off to the hotel and I stayed at the youth hostel. As I started sorting out all my clothes and so on, I suddenly shouted out in alarm as I saw there was a tick attached to my leg! I went into my usual panic mode and went and asked the hostel warden, who said I should remove it with tweezers and make sure to get the head out, and that if I experienced flu-like symptoms I should see a doctor immediately. I removed the horrible creature right away.

Later on, a woman arrived in my room and as luck would have it, she was a vet. She said she’d seen lots of ticks on cats and dogs and therefore knew exactly what they look like. I fished the tick out of the rubbish bin (luckily it was still nearly empty) and she very kindly had a look and said it looked like I’d removed the head successfully.

I’ve read up about lyme disease and it seems that if an infection does take place, it can be cleared up with antibiotics fairly easily. As far as I can tell, it only becomes a serious disease if it’s left for too long without treatment. That doesn’t stop me from worrying though!

One foot in front of the other
View all posts by Karen →
This entry was posted in West Highland Way and tagged Crianlarich, Inverarnan, Inversnaid, midges. Bookmark the permalink.