We did this walk on a freezing cold day.  After a short walk up the road from Harpenden Station, we reached the entrance to the Nickey Line on Hollybush Lane.  We had to go down a flight of steps, but there are a few step-free access points along the route. 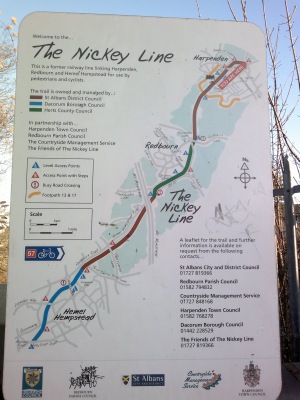 We were in a deep and very obvious railway cutting.

It was a cold day and the walking was keeping us warm, but it almost seemed a shame to be doing this walk at this time of year.  It was a pleasant route, but it must be absolutely stunning a bit later in the year when the trees have leaves and blossom.  Also, the nature of the path meant that it was very shaded, which would be a perfect feature on a hot, summery day.

The path went under typical railway arches below Ambrose Lane.

After a short while, we reached the platform and signal of the former Roundwood Halt. 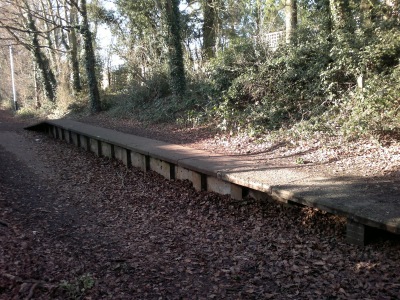 We passed an interactive information board, at which we could listen to interviews with people who used to work on the line.  There was one man who talked about sheep wandering onto the tracks and being killed by passing trains.

Where the Chiltern Way joined the route for a short stretch, there was the obligatory complicated signpost.

Most of the day’s walk was quite hemmed in, and we couldn’t really see much.  We did pass a few fields, however, some of which were crop fields belonging to Rothamsted Experimental Farm.  There was also a small patch where railway sleepers remained on the path, highlighted by frost.

After crossing a road near a roundabout, we continued along a noisier section of the walk.  Eventually, we turned off, and made our way into Redbourn.  The new houses on the outskirts of the village were built in a sympathetic style, so it was all very pretty.  We stopped at the picturesque West Common, and had lunch at a conveniently-placed picnic bench.  It wasn’t until we’d been there for a few minutes that we realised just how cold it was, and had to put on extra layers.

We didn’t stay for long, and instead headed for Redbourn’s High Street.  It was a lovely street with several independent shops, and apart from the convenience store, they were all very traditionally closed on Sundays.  I imagine it must have a very friendly, bustling atmosphere on Saturdays.  The High Street formed part of the original Roman road, Watling Street, and was traditionally a stopping point for coaches.  We counted at least four pubs, but there was an information board telling us that there used to be at least twelve inns there.

We nearly missed the public toilets, but they are there, in the car park outside the Village Hall.

Continuing on our route, we soon reached the tunnel going under the M1 motorway.  I wonder if people in the cars and lorries going by had any idea that people were out for a walk, or were wondering what it’s like.

The second half of the walk wasn’t quite as interesting as the first, but we did pass some horses, as well as a large hole that was probably made by foxes rather than rabbits. 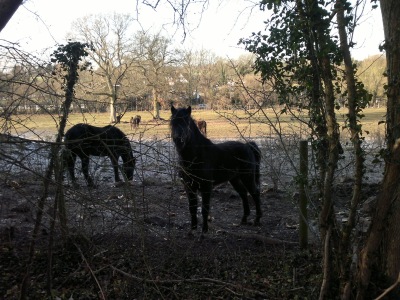 I think this scene would look absolutely beautiful in the summer.

Towards the end of the Nickey Line, we had to admit that we were getting a bit bored.  This sort of walk is usually easy and flat, but by nature it doesn’t have so much scenery as there’s trees on both sides, and most of it’s in a cutting.  I might consider coming back in the summer, though.

The main part of the route ended by the Midland Hotel.  We then had around two miles to walk through the streets of Hemel Hempstead.  About half way along, we passed a large shopping centre and stopped at a cafe for a hot drink.  From there, we crossed a couple of roads at the frankly ridiculous Magic Roundabout, before joining the Grand Union Canal for a short stint towards Hemel Hempstead Station.

One foot in front of the other
View all posts by Karen →
This entry was posted in Disused Railways and tagged Chilterns, Harpenden, Hemel Hempstead, Nickey Line, Redbourn. Bookmark the permalink.

3 Responses to The Nickey Line: Harpenden to Hemel Hempstead